Album: The Guitar That Dripped Blood 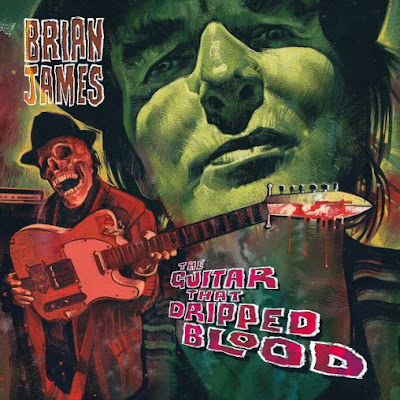 'The Guitar That Dripped Blood' is the 2015 solo album from legendary guitarist Brian James of  'The Damned'
The tone of the album is set right away by a brilliant album cover that depicts a horror cartoon Brian James which has been cleverly drawn by designer Graham Humphries. As this is an album from the genius who penned such Damned classics as 'Neat Neat Neat' and the first punk single in the UK 'New Rose' I am already sold.  The album also features guest appearances from ex-Dead Boy Cheetah Chrome and Lustkillers vocalist Adam Becvare.

Brian James likes to play live loud and I mean LOUD At a recent show rehearsal I was nearly blasted out of the room. This is because Brian is all about rock and roll and the guitar style is unmistakably classic Brian James and you can hear the raw energy that pulsates through this album and vibrates pure rock and roll. Mr James always gives 100% gritty energy in everything he does and this album is no exception.

The album kicks off with a raw rock track 'Becoming a Nuisance' is track all about ageing and the meaningless things that the older generation do to pass the time. This track has gorgeous heavy overlap guitar breaks. This was originally a 'Lords of The New Church track. The track 'Regulator' has a timeless rocking vocal.

'When The Rains Come' is a stand out track and has straight-up 'Rolling Stones' attitude.

This is honest classy rock and roll that shines through with natural talent.