Album: The Howl of the Underclasses 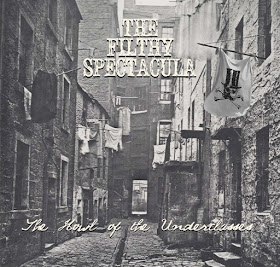 What's in a name? Well in the instance there is plenty in a name. Before I even listened to


'The Filthy Spectacula The Howl of the Underclasses ' I had a strong feeling I was going to have fun. What a great and arresting title for both band and album.

The Filthy Spectacula are a  London based gypsy pirate punk band and have performed alongside the likes of The Dreadnoughts, Mathilde's Scoundrels, Voltaire and their music mixes punk, ska, goth pirate shanties cabaret and steampunk. You get the idea it's like 'Captain Jack Sparrow only with a little more drunkenness and insanity, and there is a distinct feeling of 'Oliver Twist' and Sweeny Todd about this album. Poverty turned into poetry.

This album is almost like listening to a theatrical play. In a moment the music transports you to filthy Victorian taverns with dark conspiratorial corners sticky floors, and ill-gotten gains. Stand out tracks are:  'Oh Cynthia' a melodious twisted love song and 'One Step Closer' an ode to claustrophobic paranoia.

'Did you ever get the feeling someone could be watching you?'

This is an album that could easily be turned into a musical as the character of the music jumps out at you and creates a series of visual stories in your mind.

I like the style and concept of this band, as the mix together all kinds of genres from the world of performance, twisting it into their own creation.

This is an interesting and original album.

Thank you The Filthy Specacula. Its been a filthy pleasure.