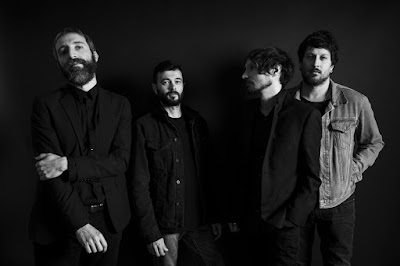 'Four' is the title of this new

rockers 'Sunday Morning' There is a distinctive summer festival feel to this album and indeed the band are currently doing the rounds of the Italian festivals. Tracks such as 'Waste my Time' are reminiscent of an easy listening sound in the vein of Bruce Springsteen. This is crowd pleasing music with a catchy crowd rousing choruses. 'Dreamer sounds like a mid-seventies Harry Nilsson track. The stand out song on this album is 'Prove it.' This is a  breezy dreamy summer vibe best listened to in a Bedouin tent in festival after several Jack Daniels spritzers.

The songs on the album were written by band founder Andrea Cola during a summer spent working alongside producer Daniel Lanois at New Orleans’ famous Esplanade studio. That experience was inspirational in bringing the album together back at the band’s StoneBridge studio in their hometown of Cesena in north-eastern Italy.

This album is rock and roll diluted with a mixer. 'Prove it' has sad lyrics with an irresistible catchy melody.