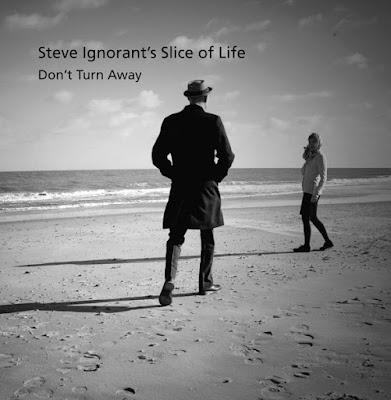 There are  'Ian Dury and The Blockheads' tones to Steve Ignorant's heavily accented naturalistic style on this honest album. This is music as storytelling. The general feel of this album is of a London Taxi Driver telling you his life story with no polish or soft soaping, and as you ride Steve Ignorant's bumpy taxi journey, you find yourself leaning forward to hear what he will tell you next.

This new collection of songs is the follow up to the band's 2014 debut album 'Love and a Lamppost.'

Formally of the band 'Crass.' Steve's writing challenges injustice in society wherever he sees it. Although much of the music is delivered in a conversational intimate tone, the spiky punk roots clearly shine through.

'Steve Ignorant's Slice of Life' is a fitting title for the band as the music encapsulates the feel of a kitchen sink drama or soap opera. This is a London performer dancing on the bare boards of his ideas. In an age of commercialism and marketing, it's refreshing to hear an album sung straight from the working class backstreets which packs a punch with its punchlines.

The track 'S.A.D' addresses the important subject of depression, particularly in a time where so many men do not feel they can talk about their feelings leading to male suicide. The listener must not be be fooled by the cheerful tone of this album. These lyrics are deeply dark and true. On the surface, there is the 'Chas and Dave' style wordplay, but scratch the surface and you will find pure poetry:

The track 'The Story Continues' is a stand out track and one of the most powerful on the album lyrically:

'Call me a crook? You just take a look, the positions they got and the massacres it took.

The people are frightened and trying to survive.

And the name of their game is genocide.'

All of Steve Ignorant's songs are songs sung from an intelligent perspective of social commentary. This is strictly an album for deep thinkers.