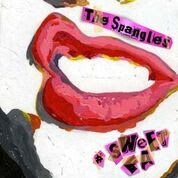 This Jangly Spangly breath of fresh air from Indie band 'The Spangles' is essential for anyone who wants a blast of 70's inspired Punk Pop and this is music to blast out on a carefree sunny day. The band combines aggression with optimism. and they have a refreshing contradiction in their album. There are waves of anger mixed with youthful optimism in these sounds although The Spangles are not young exactly, experiences both sour and sweet have not dampened their enthusiasm for their craft. The track 'Dirty Pictures' has an almost 'Banana Splits' 70's feel but was actually a track written to warn off a sleazy guy with no boundaries or respect for women, and yes, it's a breath of fresh air to hear this message from a band of men. Just because it's 'Sex drugs and rock and roll' It doesn't automatically mean that anything goes when it comes to how women are treated. The track 'The Ramones' calls back to a fast amphetamine fulled style of punk and taps into direct inspiration from 'The Ramones' Which is nearly every punk's favourite inspiration. Except perhaps for John Lydon.

The stand out track on this album is 'Back on the Meds Again' a breezy sounding track with 'Lemmy from Motorhead' style guitar breaks. The track details the misery of medication for depression but wraps it up in a glorious bubblegum pop bubble.

There is a strangely sexy breathless feel to the track 'The Only One' and there is a feeling about the whole album that takes me back to my seventies childhood in a way that I can't explain. The band's name 'The Spangles' is a perfect name as it gently nudges you towards that seventies vibe and gives you a sweet feeling of nostalgia while at the same time presenting you with an album that has a vibrant new take on a tried and tested formula. This is punk but not as I know it.

There is a great energy in this album and a feeling of immediacy with the listener. #Sweet FA has a live gig feel, that is often hard to capture on a recording, but 'The Spangles manage it.

The Spangles have a 'full-on' punk attitude sure but there is is a thoughtful social intelligence underneath the attitude that gives this album its own unique charm.