1. How would you describe the sound of The Serpent Motors? We play old punk rock with a hint of rock in 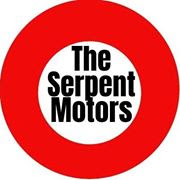 there, so we probably fit the sub-genre of Punk n Roll

2. Who are your major musical influences? I'd say the Ramones are a big influence on our sound and bands of that era including the Sex Pistols and The Clash and then Green Day and Nirvana. I like the rockier side of things as well so bands like Motorhead, Quo, and ACDC were an early influence from my older siblings.

3. What is the future for Punk? I think it looks very healthy especially the pop-punk side of things with bands like Neck Deep and As it Is and Slaves.  I think there should always be a place for that DIY garage ethic in music otherwise it becomes elitist .. so long live Punk Rock

4. What is the music scene like in The Peak District? It's a beautiful place but not known for a Punk scene!  Yes, it is very quiet, we play mainly in local towns like Chesterfield, Sheffield, and Matlock. Matlock is virtually in the Peak and has a thriving music scene.  Our mates Before they are Hanged are another Peak band that are doing well and also, of course, Drenge from Castleton who have had a top 20 album and are really a force to be reckoned with now.  We can make a racket in these hills !!

5. How did your career in music begin?  I started the band five years ago with a couple of guys who I used to go camping with and we'd get the guitars out around the fire and strum a bit of Nirvana or whatever.  One of the guys had played in a band called Ten Benson who had done a couple of John Peel sessions and he knew the music business and gave us lots of encouragement before he moved to Newcastle oop north !. Then we bet ourselves that we could do a gig, so we did what was supposed to be our one and only gig in Matlock but 5 years on and the band rolls on. Tony our new rhythm guitarist once played on the bill with the UK Subs and has been a great addition to the band alongside James Shelton on bass who is quite the multi-talented musician.

6. What advice would you give to a new musician starting out?  Don't be afraid to jump in and start gigging as soon as you can, there is no substitute for it, you can practice all you want in your garage but you'll learn far more by your mistakes on stage.  An don't be afraid to promote yourself any way you can.

7. Why is the band called The Serpent Motors?  There was a van company that we hired a van from before our first gig and we added the “The” to the name. We thought it kind of sounded like a 70s punk band that might have toured with the Ramones, the other suggestions at the time were Augustus Egg or Mam Tor ! after a local hill in the Peak. We stuck with The Serpent Motors thinking we'd change it but everyone seemed to like it and it stuck.

8. I have been to The Dublin Castle many times what is it like to play a gig there?  Yes, that was a brilliant experience playing on a stage that Madness, Blur and Muse amongst many others have played on.  You feel the sense of rock n roll history in the place and the thought that we started round a campfire and now we're playing this iconic venue.  Camden is a buzzing place as well, music and clothes shops everywhere.  We're hoping to play there again later this year.

9. Last year you released an album called Rock n Roll Radio What are your favourite tracks on the album and why?  I think the tracks that have translated well from live into the studio are Shout (Rock n Roll Radio) a really feel good up-tempo Ramones meets Green Day track. Also Sweet is the Girl and On Your Bike which are a lot of fun and even got played over in America on stations in Las Vegas and Texas which was a bit surreal.  Our old drummer Mike shouted “oi get out of it” at the end of On Your Bike and we left it in, the crowd pick up on that song one and sing along and also Sweet is the Girl which has a sing-along “na na na” thing running through it.   There's also a track on there called Make You Bleed which is a bit of rocker which worked really well and you can get stuck into playing live.

10. Who put together your artwork for your latest album cover and does the symbolism on there mean anything? The artwork was done by a talented young amateur artist called Lucy Howroyd from Chesterfield.  The idea of the serpent coming out of the mouth kind of suggests the music has got inside your head.  Just a great image too.

11. Is there any sort of music that you really don't like and would never play/listen to? Oh wow, that's a tough one.  I'm open-minded with music and say live and let live.  I really find it bizarre when people talk about hating bands or hating a music style. Hate's a big word you music snobs out there. What was the question? Oh yes erm, probably electronic stuff that has been made with a push of a button on a computer. Keep it, real man!

12. What is the thinking behind the track 'Roller Coaster'?  Roller-coaster was simply the idea that being in a DIY punk band you have to do it all yourself.  Publicity, getting gigs, hours of practice, paying a small fortune to record an album, pushing for radio play and then you are playing gigs and on the radio and it's your turn to ride the Roller-coaster.  Deep ..maybe not!

13. How would you like your music to make people feel?
Happy and want to tap their feet and sing along and jump about.  There's no mystical message its basically rock n roll, yes the songs have a meaning individually but I wouldn't expect anyone to analyze it too much.  The track I really loved writing was one called Refugee off an EP we did called “Oil on the Fire” after I saw all those terrible images of people trying to cross the Med from Africa, the world is in such a sad state and music can be an outlet.

14. And Finally, what do The Serpent Motors have planned for the rest of this year?  We have got festivals lined up in Matlock, Buxton, and Sheffield.  We are playing at a great venue called The Mullberry Tavern on June 8th to celebrate the Queens birthday in a true punk rock style.  We are also playing a fantastic festival called The Matlock Bath Music Festival that we play every year in July, with 70 bands on throughout the town all day from midday to midnight, the buzz is just brilliant for that one. Then we're hoping to record an album this autumn probably at Toolmakers Studios in Sheffield again, so many ideas coming out of our current line-up it feels a good time for the band.