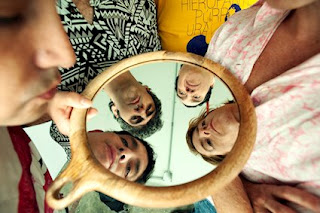 If you like 'Talking Heads' you will like this album as it possesses the same New York attitude with a surreal vibe. Take a bag of  'space dust' sweets and add a swig of lemonade and you get the feeling of this album - frothy but dangerous. The lead track of this album is 'Hott Fun' which starts like a spacecraft landing then switches to a jangling catchy dance beat, then surprises you again on the Bowie influenced key change to 'Sugar sweet gumdrops' and an irresistible seventies vibe.

'Your 33 Black Angels' music takes me back to an 80's sensibility highly influenced by Bjork and Lou Reed. The Track 'Dark G' starts you off gently before pulling you in with a guitar riff then swooping away again, moving backwards and forwards in depth of sound. Artwork for the ears.

'Loathe' is a clever title as it sounds very like 'Love' and has an upbeat feeling. You could easily think you were listening to an ordinary love song until you study the lyrics. This is my favourite track on the album, I like it's contorted charm.

'Britpop Reveries' is a wistful ode to Brit Pop taking it's cues from 'Pulp' 'Blur' and 'The Kinks' but maintaining it's original take on this era. Josh Westfal has a vocal style reminiscent of Russell Mael from Sparks. 'Eternities I' reminds me simultaneously of several of my favourite bands and music genres but also throws out several of it's own revelations. An enjoyable slice of New York style.