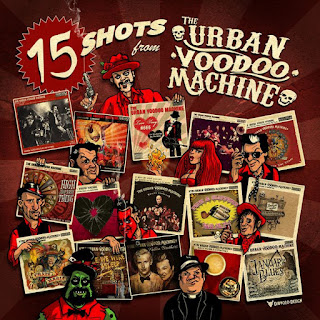 I am going to make no secret of the fact that I LOVE The Urban Voodoo Machine. Paul-Ronney Angel's gravelly vocals are right up my street. When you have started to feel that there are no original ideas happening out there and you have given up hope of finding something interesting and unique. I urge you to listen to this album. The tracks on this album vary in subject but are all about the human condition such as 'The Kinks' inspired 'Pipe and Slippers Man.'

But you also get the downright political track  'While we were all asleep.' is a thoughtful track all about fake news and the way that the mainstream media successfully distract the public with trivia while real issues go unchallenged.

This album is studded with unique ideas. Orphan's Lament is about Paul-Ronney Angel's tough childhood and 'January Blues' is perfect therapy to help get you through January as you realise you are not the only one suffering in this miserable month as you listen to the lyrics of this song you enjoy a sort of therapy, a twisted therapy admittedly, but much of The Urban Voodoo Machine's lyrics offer up a roundabout sort of reassurance that both audience and band are in it together. This band has a philosophy of entwined audience connection both in live performance and on record. The really special quality that TUVM have is that you can't put them in a box. This music isn't blues it isn't punk it isn't jazz it's a combination of all of these things plus ideas you never heard of before plus attitude. It's Bourbon soaked Gypsy Blues Bop 'n Stroll' and it's unique only to 'The Urban Voodoo Machine.'

This is a band that are disarmingly honest about such difficult subjects as mental health, addiction, anger which results in a feeling for the listener that no one is truly alone. That we are are all part of the human experience and in the end, this album is life affirming.