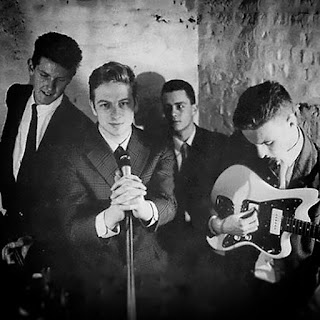 The revival of vinyl makes me dance with joy and 'The Claim' have created a beautiful Green vinyl release which has been remastered from the original tapes of their classic album  'Boomy Tella' a mod-influenced album that was originally part of The Medway scene and a huge influence on 'Blur.'

Hints of a  working class Catholic upbringing in 'Not so Simple Sharon says' and 'Love Letter portrays a sweet tune with sour lyrics about the funeral of a disliked relative. The Claim are truly an Indie band who have always marched to the beat of their own drum and shunned commercialism. Listening to their music you can hear their distinctive influence on later bands.

'The Claim's music is timeless as it talks about the human condition. Rather than following fads and trends in musical ideas. If you enjoy the countless bands that have been influenced by 'The Claim' you will love the original.