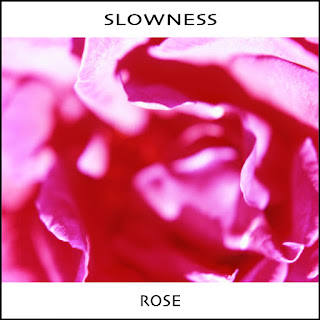 'Slowness' were formed in San Francisco and are now based in New York. 'Rose' is the first single release from their long play album which will be released in June. This follows from their 2014 album: 'How to keep from falling off a mountain' and 2013 album: For those who wish to see the glass half full.' The band are called 'Slowness' as they wish to keep their music mid tempo on purpose as lyricist Geoffrey Scott explains that this reflects the psychological state of the USA at the current time. All the band members were going through personal break-ups in the middle of the creation of this single. However 'Rose' does not reflect sadness or angst. Rather it reminds me of 'Morcheeba'
and makes me visualise a time when you have just been let out of school or the workplace and the whole summer is ahead of you. It made me feel as if I was at Brighton Beach at the start of the season of optimism. Or on a Californian beach digging my toes into wet white sand. Drummer Christy Davis has been playing for 30 years in New York City working with such names as Adam Horovitz (Beastie Boys) and Julie Lynn has said that she has opened up 'Slowness' in a new direction. I agree and I felt transported by this single and look forward to hearing the album release.