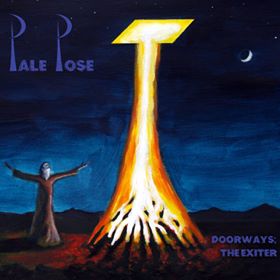 If you like 'Nick Cave and The Bad Seeds' you will love 'Pale Pose' a band that seeks to marry darkness and tenderness with the same attitude and poetry as Nick Cave. This USA band also adds a twist by creating their own blend of Southern Gothic music to the mix of poetry and spiritual truths. There is even a touch of 'Black Sabbath' influence here on the heavier sounding tracks.

'Pale Pose' is a band formed by Tom Ashton... ex 'March Violets' and 'Clan of Xymox' guitarist and Kyle Kendall who is the lyricist and the concept creator of 'Doorways.'

The general theme of the album is a wish to create a new set of morals to live by rejecting organised religion and seeking a higher truth of power and meaning within ourselves. The album cover art work reflects this idea of a figure lighting a fire. This is one fire for one person and represents the fire in each individual and calls out to the the living God that lives within each person as they understand that God.

The track 'Shadow Tooth' is the start of this theory on the album and calls for a greater feeling of self acceptance whether this is good or bad within ourselves. This track is about embracing the 'Shadow' side of being human and accepting it.

'Masks With Blue Dynamite' is the stand out track on the album. Aside from having a dynamic title which came to the lyricist in a dream the track has an abstract and powerful feeling which reflects the title.

Each track on the album invites you through a different doorway in the mind in which to view your concept of your own existence.

'A Parcel Apart'  feels like the soundtrack to a 'Gothic Spaghetti Western' movie, or perhaps stranded in the Nevada desert in California you can almost feel the sand on your lips.

This is a new band waiting to be discovered. If you love Goth music I recommend that you discover them.