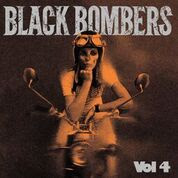 Birmingham Rock Trio Black Bombers have created this mini-album as a homage to the music of the mid-eighties. This is proto- punk rock and roll coming at you live and in your face a mini- album recorded in one weekend.

'Animals and Cages' has a sexy drum heavy intro - and is unusual in it's style of polished backing with raw vocals, Jimi Hendrix style guitar breaks and a sudden ending.

'Day after Day' opens with 'The Who' style chords and then swings into is a change of pace with a 'Manic Street Preachers' vibe.

Alan Byron's vocals sound like someone who used to be angry but they got over it. A kind of muted anger. not quite punk and an element of risk taking style, while 'Hair of the dog' has a sliding guitar and almost a 'Thin Lizzy' feel.

'Gnarly' is the stand-out track on this album - Dave Twist whacks those sticks like no-ones business - it's gritty and sexy and this is the kind of rock drumming that I love to listen to. This track reminds me of 'The Damned.' and that is about the highest compliment I can pay here. Guitarist Darren Birch is a former member of   'Gunfire Dance' which were signed to 'Island' and produced by Brian James and Rat Scabies.

'Sometimes' is  a track in the same vein as 'Gnarly' and sounds like a continuation of 'Gnarly' again some fantastic drumming on here. This mini-album serves up a great taste of 'Black Bomber.' and as a new comer to this band, I am now anxious to go through their back story and hear more. Great rock with great attitude.